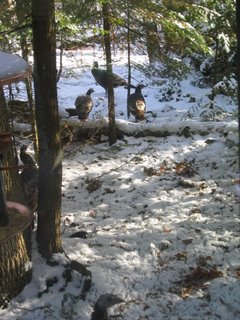 I like to picture myself as a free thinker, a clear thinker - the sort of guy who crawled out from under the barbed-wire of religion's prison-camp and never looked back. Still, doesn't that kind of person have to believe in something, or someone? We're certainly expected to believe in Science and Education-via-University, and if we possess a shred of intelligence, we absolutely, positively, MUST believe in the theory of evolution. And I'm trying, I really am.

Evolution, as I understand the concept, ought to work for the advancement of the species, right? So George W. ought to be better suited to the job than George Washington was? I'm not seeing it, but that's only a couple of hundred years. Let's increase the time-span tenfold: J. Falwell vs. J. Christ; again, hard for a layman, such as myself, to see the improvement. Madonna ca. year zero vs. Madonna ca. year two thousand ? Hmmm.

If Neanderthals are passe, how do they get elected? If the university-educated are the epitome, why is so much of their poetry so dreadful? Moses could part the Red Sea, but the Corps of Engineers can't handle Lake Pontchartrain?

If Wonder Bread was such a wonder, why haven't you had a slice in years? Weren't loin cloths at least as comfortable as B.V.D.'s or Jordache? Wasn't the Pontiac GTO better-looking than the Pontiac Aztec? Don't the wild turkeys in my woods appear to be as smart as the ButterBalls fattening up behind the fence? How many generations of mosquitos have passed in the last sixty-something years? Thousands, I suppose, but they're as annoying as when I was a boy.

You might argue that we no longer look much like the people portrayed in Egyptian glyphs, with their heads on sideways & all, but I ask: didn't Erasmus of Rotterdam write better essays than this?

a follow-up question: If The Big G didn't like the idea of evolution, why create scientists?

Just a thought...I have no idea really.

I guess it all depends where one decides to focus one's eye. After all, in the last few thousand years we have had quite a few remarkable advances. Blogger is one that comes to mind. Another is the flushing toilet. Of course, there is electricity, the hot water tank, the internal combustion engine, the submarine, atomic bombs, plastic, two buck chuck, eyeglasses (not to mention contact lenses), the piano, the sextant, vaccination for small pox, the printing press, iPod, paved roads, and on and on and on. And people of European descent made a 500% advance in the area of personal hygiene (at least many of us). Of course, am I presenting examples of evolution? I don't think so. Is comparing Jesus Christ to Falwell a meaningful comparison, at all? Or Washington to Bush? I don't think so. For one thing, evil people often out maneuver good people. (I like to think that eventually good people win out over evil people, but that probably a delusion). More important, however, I think one has to stick to examining biological changes in nature, which is what Darwin did. Until some scientist discovers some fact that explains some unknown, every instance of the unknown is resolved by supernatural explanation. i.e. God. I find it interesting (and Christians must find it annoying) how much ground God continues to lose among believers in western religions (i.e. Christians) as science continues to explain more of the unknown. I also find it interesting that Buddhist don't have these same issues with evolution. Good for them!

Thanks Shan. Yes, the ape I have chosen to see, oddly enough, gets his clothing from the same haberdasher that outfits the emperor.

And thank you, John - and congratulations on the good hygiene thing.

Who or what is Two Buck Chuck? A fairly good deal on a reasonably decent grade of ground beef? A cheap horse-racing afficianado? A cartoon beaver?

Are you saying that we simply can't wait for your beloved evolution to provide better presidents?

And why are you the only one I can get riled up with my tongue-in-cheek semi-humor-psuedo-psycho wanderings?

After reading Shogun (yes, I'm finally done) and learning what slobs Europeans were back then, I am impressed how far we have come in this regard. Our forefathers took a bath once or twice a year. Now, I'm even flossing my teeth, let alone bathing every day!

Two buck chuck is the slang for wine bottled by and sold under the name of Charles Shaw (only at Trader Joe's, unfortunately). It's a relatively decent everyday Californian table wine that started out at $1.99 a bottle. The price has since risen and now sells for $2.99/bottle. Still amazingly economical at $35/case. We buy it by the case and drink a half bottle pretty much every day. Chuck shows us that it's possible, if working on a small margin and selling a lot of wine, for California to produce a wine that does not cost $20 and tastes okay. Of course, there are those who have big budgets and can afford to slurp up $10 worth of wine per day. But we can't and two buck chuck makes wine a daily possibility.

Why? I don't know. Whenever I post anything too serious on my blog, or something that requires a person to take a moral or social position, nobody sends a word. Yet, a silly photo of this or that, will stir them into action. (I imagine and should test the idea that a photo of a kitten or baby would muster the greatest response). I think people, especially Norte Americanos, don't like to consider or discuss politics, religion and sex (unless they belong to the same church). In Argentina, by contrast, people love it. That's all they want to do and there are cafe's filled with people gabbing about these things and more. I don't know why that is, but my view of us (Norte Americanos) is different now that I've had some exposure to the outside, as it were. I have come to recognize how deluded, insecure and judgmental, in general, we are in these here you-knighted-states. We are amazingly intolerant and terrified of each other and others. This is mostly the result, in my opinion, of religion and the righteousness that is eschews. It breeds intolerance, an attitude of we're right and you're wrong, and isolates people from others who have different views. It's effectively a form of in-breeding . . . something I avoid.

The first post I ever read on your blog was one that inspired me to quote Ghandi, "Be the change you want to see in the world."

So that's my argument for not getting riled up. I don't like seeing the world riled and, though I often fail to live up to this, I believe that the one true way to make peace is to be peace...

And, to be truly honest with you, I have to tell you that though I love reading your tongue-in-cheek semi-humour pseudo...posts, I am not nearly so witty and thus a little intimidated at the prospect of throwing myself into the mix.

Shan - I know you are right, and the way I hope to bring about change is to point up the absurdity of the arguments. I don't mean the argument of one side or the other, I mean arguing at all about something which is pretty much unknowable - the origin. SOME of the paths taken since THE BEGINNING have become evident. More will, I'm sure. But to try to convince someone of the other persuasion that you are CORRECT, seems a large waste of time. And a further cause for enmity. And a further loss of magic. And I hope there'll always be a little bit of magic, whether created (ooo - I said the word) by a guy in a tall black hat, a Big G God, or a bunch of little g gods. Argue not concerning God, says Whitman, wisely. Don't make waves, said a cautious, and anonymous, person. I'll try, but it's FUN, sez I.

As to your ability to fit into this mix - you forget that I read your blog - and I know that you are more than able to hold your own.

Nicely said, Ralph. I, too, hope there's always room for a bit of magic.