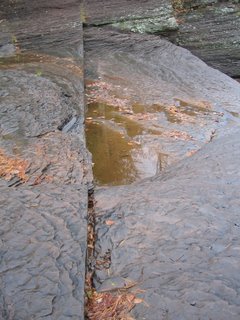 I get a little panicky on those days when no writing appears, let alone anything approaching poetry. Last night I was reading from Rainer Maria Rilke, who helped put things into perspective:

"In order to write a single verse, one must see many cities, and men and things; one must get to know animals and the flight of birds, and the gestures that the little flowers make when they open out to the morning. One must be able to return in thought to roads in unknown regions, to unexpected encounters, and to partings that had been long foreseen; to days of childhood that are still indistinct, and to parents whom one had to hurt when they sought to give one some pleasure which one did not understand (it would have been a pleasure to someone else) : to childhood's illnesses that so strangely begin with such a number of profound and grave tansformations, to days spent in rooms withdrawn and quiet, and to mornings by the sea, to the sea itself, to oceans, to nights of travel that rushed along loftily and flew with all the stars -- and still it is not enough to be able to think of all this. There must be memories of many nights of love, each one unlike the others, of the screams of women in labour, and of women in childbed, light and blanched and sleeping, shutting themselves in. But one must also have been beside the dying, must have sat beside the dead in a room with open windows and with fitful noises. And still it is not yet enough to have memories. One must be able to forget them when they are many and one must have the immense patience to wait until they come again. For it is the memories themselves that matter. Only when they have turned to blood within us, to glance and gesture, nameless and no longer to be distinguished from ourselves -- only then can it happen that in a most rare hour the first word of a poem arises in their midst and goes forth from them."
Posted by Ralph Murre at 8:19 AM

Wow. This is really good.

Now I know why I have no business even trying to write any poetry. I feel vindicated.

See you and Nancy soon-