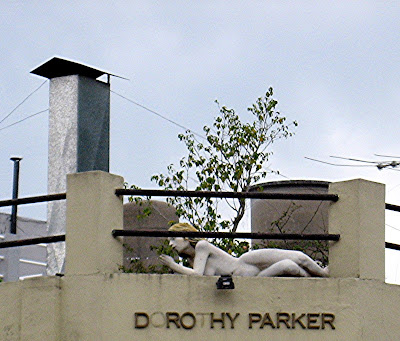 I don't often present the work of others on this page, but I was just going through some of my Buenos Aires photos, when I remembered looking up to see the image shown above, which got me to looking up "Dorothy Parker", who is too little remembered by people of my generation, and even less by those younger. Things are looking up in the field of looking up: the Googlization of Dorothy yielded, among other things, these quotes:

Sadly, there was nothing listed for D RO HY PARKER . . .

Ralph, that is a really funny photo. What can you tell me about it? I run the Dorothy Parker Society. If that is some kind of statue to Mrs. Parker, I'd be thrilled. Thanks!

I don't know a lot about it -- the scene photogaraphed is atop a small restaurant (maybe closed now) in the Palermo district of Buenos Aires. I believe Dorothy Parker is/was actually the name of the restaurant, and I believe it was run by a Uraguayan family. If I were in BA I could walk right to the place, but I can't even tell you the name of the street with any certainty.

Dorothy Parker, the restaurant, was located at the corner of Acune de Figueroa and Costa Rica, just a 1/2 block from our southern house. Sadly, the food was uninspired. The one time I was there I ordered the Pollo Especial (Special Chicken) and got a dry breast without so much as even salt on it. The white wine arrived warm and the service was lousy. I never went back. The only thing Dorothy Parker had going for it was the name. Like the real Dorothy Parker, this place attempted suicide. Unlike the real Dorothy Parker, they succeeded. They were replaced by a pizza place that emits an oder that causes me to gag. I always cross the street to avoid getting a whiff. Fortunately, Buenos Aires is blessed with hundreds of good places to eat!

Thanks for the additional information. I love the statue too. What happened to it, I wonder? Is she blonde because of Parker most famous story, "Big Blonde" I wonder? I linked to the blog from dorothyparker.com too. Thanks!