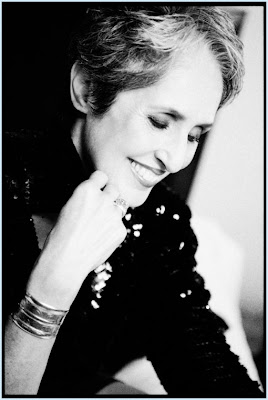 I was just looking, with justified admiration, at the photo of Joan Baez on the cover of her great autobiography "And a Voice to Sing With", when I found I had to explain that Joan and I have been together for a long time. Since before the sixties turned into THE SIXTIES, in fact. Oh, we've had an open relationship, to be sure - I'm OK with the fact that she's had other lovers, and she's never said a word about my infidelities - but she's always been there when I've needed her, which has been pretty often. Those times when I needed somebody with some heart, some guts, some brains, and a voice to sing with.

Maintaining a long-lasting relationship is easier, I suppose, when one of the partners is totally unaware of the existence of the other, as she is unaware of me, but she's been true to the spirit of our romance, and I am happy. I can only ask what great love is without its little oddness ? Her book talks of the old days, and of her waiting in a dream for Marlon Brando to come along and swoop her up on his Wild-One Harley. About the same time, as it turns out, I was living in Northern Cal and was waiting in a dream for Joan to pick me up along Hwy. 101 in her Jaguar. I mean, what else did she have to do?

Years later, after demonstrating the courage to stand up to some of the nastiest offenders of all that is holy, she came to sing in the little auditorium of the barely one-horse Midwestern town where I live, so I went to hear her, and to be in the same room with one of the great heroes of my life. I sent flowers backstage, but lacked the courage to try to meet her. Our relationship is still unflawed by an actual introduction. I've heard that love knows no bounds, so I'm not sure what this is. But it's something like love.