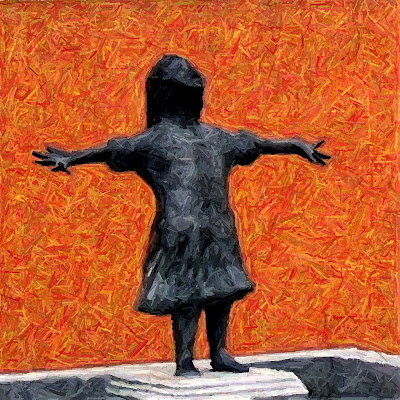 public sculpture in buenos aires, artist unknown to me

and he knew the dimensions of thirst
are not measured except by drought,
are not fully understood but in places so dry,
vinegar is more likely than water.
(A sponge of vinegar, lifted as sour offering
to the King of the Jews, hung against the sky.)

The dimensions of suffering, he knew,
are not measured against the bodies of gods --
these lengths and spans are known by flesh,
known by woman and man.
(His mother there, who bore this life,
and saw it taken again.)

I thirst, he said,
and the divine became human
and the human became divine,
as the day darkened
in an eclipse of immortality;
morality lesson played out.

I thirst, he said,
and he knew the scope of feelings in me and you
are not gauged against the heavens,
but by desire for what is given, and spoken
in words not ethereal, but earthly, and real:
Hunger. Want. Thirst.
I need. I feel.

( Rain, too, falls from on high,
but must evaporate, someday,
to rise again, though we may wonder why.)

This piece was written last year, and was presented as one of "The Last Words", in company with six other poets and a chamber music ensemble playing the work of Haydn.

Email ThisBlogThis!Share to TwitterShare to FacebookShare to Pinterest
Labels: holidays and such, photos, published poems