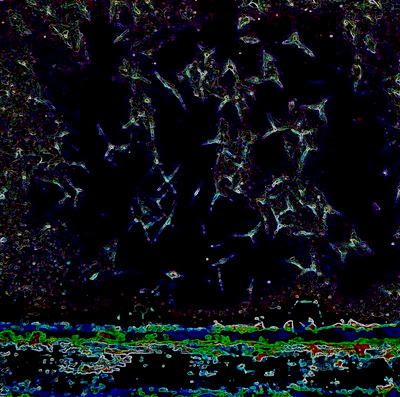 And at times in my heart there is a music that plays for me.
~ J.P. Donleavy

Yes, you too? You’ve heard it? Sometime snare of drum, penny-whistle, nickel-plate, quarter-note? Hum a few bars of a new tune; bring in a viola d’amore to this baroque adagio – unbroken, unbeaten, to play a song for a new season. It may be as well not to enter a poetry contest, a dance contest, a salon d’art.

Is it treason to suggest that in his condition blind ambition is deafening the inner ear? Competition is not improving the species, but robbing it of its art? Is it wrong to think that if he listens, if he hears that music deep within he can begin, at last, to write the score, to pen a few notes on a clean page? Is it outrage to suppose that not everyone has heard this rhythm, not everyone goes dancing to the same beat? Wooden hearts clicking like castanets for clay feet?

climbing the stairs alone
an oddly-dressed man speaking
another language

~ Ralph Murre
Sure, it's just a case of sour grapes, isn't it? After all, three pieces of my short fiction just went without notice in a competition. Yet, I'm not sure . . . earlier this year, I served as a preliminary judge for a prestigious poetry contest, and realized that someone with something truly original to say - or with a truly original way of saying it - would have a very difficult time. However, I put such a piece forward and it wound up winning the contest. So, am I putting down the idea of arts contests? No, I simply don't think they do much to engender the creation of anything new, and I think that's largely because most of the entrants don't want to take risks. Someday, we'll get into the discussion of the NEED for anything new, the NEED to take risks.
Posted by Ralph Murre at 3:46 PM

Email ThisBlogThis!Share to TwitterShare to FacebookShare to Pinterest
Labels: fun with digits, haibun, on writing

Ralph - I looked - for your fiction piece, for my poem - among the Pulse winners, with some disappointment at not finding our names. I know I'm a real amateur in poetry, nothing to go on other than ego. But, speaking of ego, I was quite confident my frog photo would get some sort of mention, and now I'm disappointed it wasn't recognized as first. Such ego, such unrealistic bravado. ** There is always next year, once wound-licking is over. - DP