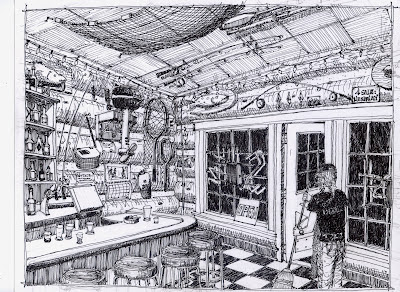 Like the beaded-pine wainscot
of his backwoods tavern, up north,
Clarence has darkened over the years,
hearing the lies of fishermen and poets;
the truths of hunters, fresh from the kill.
He’s been scarred by bar fights and carelessness, but
cleaned up and preserved by Irene,
who sees past his rough edges.

Until then, he watches and listens;
soaking it up, gaining color - and
telling his stories under a flickering beer sign:
a bear in a canoe, going with the flow.


In looking at some old poems, I came across this one, written in 2004, and which appeared in my first collection, Crude Red Boat (Cross + Roads Press). There are a few from that era that I still like.
Posted by Ralph Murre at 12:11 AM