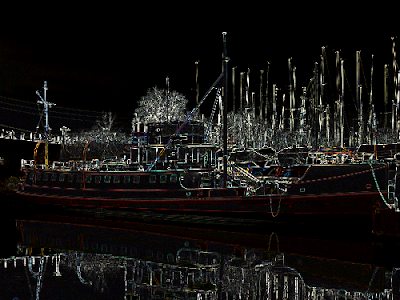 Is there anything that can bring you up short quite like seeing an old acquaintance or an old love after the passage of a number of years? Recently, on a drive that crossed Milwaukee's Kinnickinnic River Bridge, on South First Street, I glanced down river and was surprised to see just such an old acquaintance -- The ex U.S.E.P.A. "Roger R. Simons", ex U.S.C.G. "Maple" -- as I live and breathe, partially hidden around a bend, painted as I'd never seen her, ill-kempt, if kempt at all, but unmistakeably HER. (I know how odd it is to think of anything named "Roger" as her, but that's not today's discussion.)

When I sailed the Simons in 1976, just after receiving my sea card, she was already old, having been retired from Coast Guard service and having been pressed into use by the U.S Environmental Protection Agency, for which we worked, indirectly, doing a series of research projects on Lake Michigan. We brought the little ship up to a sparkling, if dated, appearance when the company for which I worked lost their government contract due to some fluke in the language of bid-letting. I left her with great reluctance.

I saw the ship a few times after that, once when she was being refit in Sturgeon Bay, and later, up in Superior, where she was a display at the Barker's Island maritime museum for some time. Then she disappeared from that port and I assumed she'd been ignominiously treated, probably by men with cutting torches. Imagine my shock then, to see her still afloat, but bearing no name, no recent paint, her many ports covered with plywood, and generally ratty, but still with what I have always considered to be a sort of peasant-girl's beauty.

I was taken aback to see how she'd aged, until I looked in a mirror. 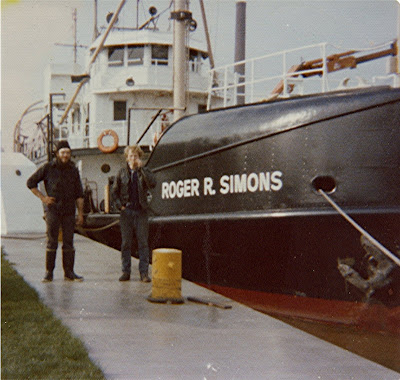 Yours truly, with deck-hand Dave Hagen, if I remember correctly; in a photo probably snapped by the mate, Larry Van Deusen. 1976.
Posted by Ralph Murre at 11:41 AM

Ralph - The Maple, ex-Roger Simons, looks far from ship-shape and in fact appears to be moored next to Pilot Island's blighted shores. Had little idea of your history with this vessel. I remember its name among Coast Guard vessels, maybe saw it from a distance when it was still at Barker's Island. A hull of memories, that's about it at this point. Good for something, but what? A page from the Arvinson log - that's what. - Dick Purinton

Oh Ralph, what a memory to unearth along with vision of the past. I think you've aged much better than she has. Wonderful drawing.

Nice drawing - and a good story.

Age is an issue of mind over matter. If you don't mind, it doesn't matter.

Thanks for all your good words ~ but I must admit that it is not a drawing at all, just a photo that I played around with, digitally. I snapped a few shots of the boat where she lies now, in Milwaukee, but her condition is so sad that I couldn't bear to post a photograph that showed her accurately. ~ R.

Really? I thought you had done one of those drawings where you put down some colors - then cover it with soft, black crayon, then you make the drawing with a sharp tool that scrapes away the black lines to achieve a night time effect.

I still like it - even though it is digital, it is still your art! Well done.