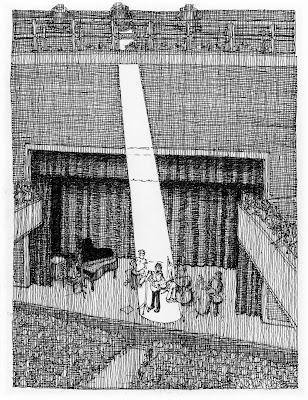 That unknowing object of my affection, Joan Baez, came over again last night. Oh, just for the appearance of propriety, we had in approximately 749 of my neighbors, which filled our little hall in Fish Creek to the rafters, but clearly, she had come to see me. (Backstory at http://caparem.blogspot.com/2009/05/open-relationship.html) And , as always, she won my heart again. Is her voice just as good as ever? No, the voice, too, is a thing of the flesh . . . but, is she still damn good? You betcha.
Highlight of the night? For me, Woody Guthrie's Deportee, poignant as ever, and maybe more so in light of the current immigrant struggles. Surprises? I thought she tread VERY lightly on the topic of our several wars. Also, something of a surprise to me, was the choice of an opening song which avowed a belief, if not an absolute faith, in God, and a couple songs later, she wove Take It To The Lord In Prayer into a medley. Now, anyone with so little to do that they follow this blog, will probably have gathered that I am not personally a great believer; but I must say I find it reassuring to learn that The Big G God is not yet actually the franchise property of the Right Wing.
While Ms. B sang many pieces without backup, much to my delight, she was ably assisted on quite a few numbers by a very good quartet, among whom was her son, Gabriel Harris, doing a smashing job on percussion. (You don't really have to fancy yourself a poet to use "smashing" and "percussion" in the same sentence, but it helps.) What a delight it must be for mother and son to be touring together, making music. She's been at it for a half-century, so if you haven't seen her in person, you might want to think about it soon. You will not be disappointed.
~ Ralph Murre
Posted by Ralph Murre at 8:55 PM

Fourth time I've been able to see Joan in concert (and I don't even watch movies that many times!)~she will always be my #1. Yes the voice is limited now, we hear the changes in where its going, but in memory, we hear where it went and I sail on knowing I was there with her. "Scarlet Tide" was a new one to me ~ lovely. As I become an Elder, I celebrate: We're going in the best of company Ralphie, as our grand hero approaches ... She is OURS!