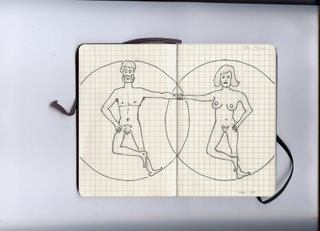 To the Individual or Group Submitting the Human Body

Rather appealing design ideas evident in even utilitarian aspects, though not without a few questionable details.

While most entrants in our mammalian division chose to cover their models in hair, often beautifully colored and patterned, you opted for the naked look. While this may work well for earthworms, we have to wonder about the practicality in anything warm-blooded. Range of operation may be severely limited if some sort of covering is not devised. It appears that most entries in this division, with less hair, were intended for aquatic use. Yours simply don’t have the lungs for that application. And frankly, we believe that something more cuddly would be an easier sell.

Eyes appear adequate but lack good peripheral vision – take a look at what’s going on over in insects.

Ears – functionally acceptable, but least appealing aspect of your entire presentation. You’d have done well to have tried something like they’re using on Labrador retrievers. To your great credit – you have shown us a nose which may be the best looking in all of mammalia.

As to the teeth – if you have the technology to replace these once, as you’ve demonstrated in the growth process, why not keep replacing them every time there’s a problem? This appears to have been an economic decision which we cannot condone. The shark gets high marks in this area.

Very, very nice work on the female breasts, though we wonder if the decision to make them so attractive to the male may not lead to problems in the long term. And why, please tell us, do you mammal designers insist on putting the little pseudo-breasts on males? These seem a peculiar affectation, akin to portholes on Buicks.

Genitalia appear functional. (You did not choose to demonstrate the birth process, and some of our members wondered from exactly which point the spec'd 7.5 lb. baby would emerge.)

While the feet look pretty good, and one of our committee was quite taken with them, we question their suitability in rough terrain or harsh climates.

We do feel that ALL members of the primate design group should share a special award for their work on hands. While we initially questioned the group’s efforts to stand these creatures on two feet, we’ll be happy to admit that the opposable thumb feature may well have been worth it. We expect great things of thumbs. A brilliant concept - dare we say it? - an intelligent design.

We are pleased to announce that you have been awarded an honorable mention for your entry. As in the past, all top awards went to species with tails.

Watch for announcements of upcoming contests, and keep trying!

- Ralph Murre, writing for the committee of the judiciary
Posted by Ralph Murre at 9:07 AM