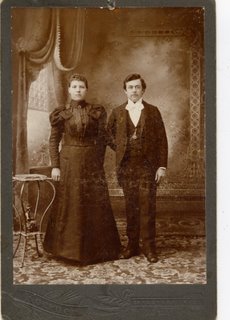 photo by Koerner
Of course, I know we didn't ALL have plaid woolen grampas with steel shovels (see previous post) ; some had plaid seersucker grampas with titanium golf clubs. And many had none.

I never really stopped to think how lucky I was to have known, however briefly, all four of my grandparents. I realize, now, how few of us have that opportunity. Families spread across oceans and continents; a generation here, a generation there. Some, wiped out by a war here, a famine there.

We have been, and to a large extent, still are, a nation of immigrants. As such, we always have a huge number of families among us whose elders aren't around. It leads me to wonder if this plays a part in the amount of unrest and, perhaps, elevated crime rates we see in some neighborhoods comprised mostly of recent immigrants. Don't misunderstand me, I'm not discounting the influence of low income, lousy housing, language barriers, or the prejudices of the not-so-recently landed. And I certainly don't think that current waves of recent arrivals are any more crime-prone than their predecessors.

I simply believe that knowing my grandparents had a steadying effect on my life, even though I didn't get to spend much time with them. I know that my sons benefitted from their grandparents' influence.

As the only surviving grandfather of my clan of little people (to borrow a phrase from a friend), I guess I'd better watch how I influence them. I do have a plaid woolen mackinaw, but I attack the snow with a PLASTIC #12 grain shovel.

My grandparents had a profound impact on my life. I was born on my grandfather's birthday and grew up watching him deal with early onset Alzheier's. His courage was an amazing example and his disease taught me not to take life for granted. My grandmother is one of the most amazing people I know. She truly is light incarnate.

I am so thankful for the close relationship my children have with thier grandparents. It is a gift I don't take for granted.

I wish we were a culture that respected our elders. I'm a fan of Tony Hillerman novels and always appreciate the relationships between generations he describes in his novels set in Navaho culture.

BTW, at the risk of being really long-winded I have to say that I love the variety of images you post on this blog.