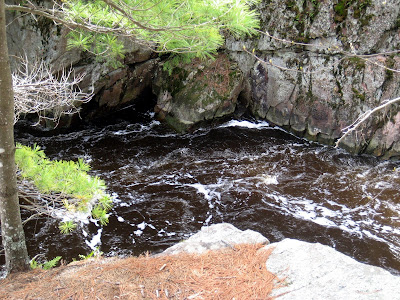 "Forgive us our trespasses," we beg; to no one in particular. "As we forgive those who trespass against us," we continue, as white Americans, having no idea up until a few years ago what trespassing against us might even feel like, let alone being ready to forgive it.

I saddled up my Harley-Davidson Rozinante on Saturday, and ventured out on a little quest to another corner of paradise and saw just what I had hoped to see -- but did not feel what I had hoped to feel. I knew, of course, that I was on the land of the Menominee, but had failed to REALLY take into account that it was not, by any stretch of the imagination, my land. Because I am sympathetic to Native causes and may even have a drop of Native blood in my veins, I had supposed that my being on a land reserved for its original people would feel just fine. After all, I was entering with a degree of reverence, would take nothing but pictures and leave nothing but footprints (and not MANY of either.) I sprinkled some tobacco which I'd brought along as a sort of spirit offering. It was not my first time on a reservation.

I think the difference, this time, was that I began to think about that word. "Reservation". Began to think about it not only as a prison where we hold people for the crime of being native, but as a tiny fragment of land reserved. For the people born to it.

Oh, I will still ignore "No Trespassing" signs most of the time, but I think when I'm on reservation land I will show the courtesy of asking my hosts' permission before wandering in as though I owned the place. I think I'll never hear "This land is your land, this land is my land," in quite the same way. This land is your land.

Forgive us our trespasses.

Anna said...
This comment has been removed by a blog administrator.
6:51 PM

Throughly enjoyed this and your poem on Poets Who Blog!

reserved for the people born to it, yes. Excellent post.

hmmmm... so many interesting moments here. I shall mark your pages and return. thanks.