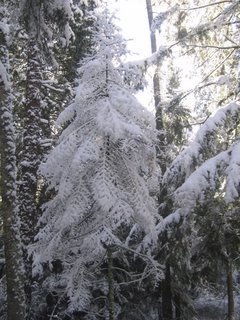 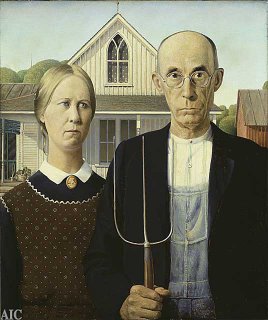 The Deer and the Antelope,
on Iconic Speech

If I say ‘cable car’, you can almost taste the sourdough bread, or at least the Rice-a-Roni. Tony Bennett is just around the corner. Fog rolls in. If I say clang, clang, clang; Rosemary Clooney, or somebody, is having her heartstrings zinged.

If I say ‘spotted owl’, a war breaks out between tough, grizzly types in hob-nailed boots and a group of elderly flower-children.

1968, and it’s Chicago and Mayor Daley is bustin’ heads. Milwaukee means beer. Detroit means cars; big ones, chrome-plated, and what’s good for G.M. is good for the country, and I’m back to Apple Pie. And Chevrolet.

Ever wonder what people said before “redneck”? How did we know what to think about a state before it became red or blue?

Bush and born again and abortion and beat and hip and hep.

Marilyn and Madonna and Martha and Madonna & Child and Oprah. Venus on the Half-Shell and the Sistine Chapel and the Eiffel Tower and the Tower of Pisa. Katrina. Tsunami. The Golden Gate.

I suppose every society has these shorthand references which convey volumes of information, whether it’s the plum blossom of haiku, the cartoon of Nixon’s “V”, or the sight of an SUV – still, I wonder what future generations will make of it all when they try to read some mouldering documents found in the ruins of our time. I’m assuming that someone, somewhere will be able to read. I’m assuming ruin. 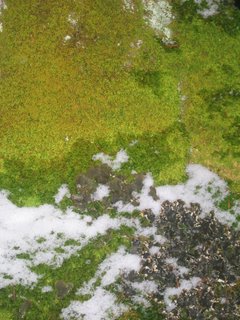 Walden. Okay.
Nebraska. Maybe.
Isla Negra. Hmm, I don't know about that.
The water spins the other way down there. Even the stars are different.
- that from a friend in response. Point is, with a Neruda or a Kooser or a Thoreau singing the song of a place, should I think that my senses will glean something more? Or, should I open my eyes, look about me, and write the song of where I am? I don't know. I look down to an earlier post (the sacred and the sold-out) , and I see that I'll have to sing the song of where I am without TELLING where I am.
Posted by Ralph Murre at 8:19 PM No comments:

I keep hoping that some of my old rants will become passe, but the wheels turn exceeding slow. Here's one from about a year ago :

It’s money that steers our ship and oil that floats it. The sea of oil is going dry and money doesn’t know where to turn. We have a hard time thinking how to save the sea, so we think in terms of carving a new figurehead.

It is not George W. Bush, or his pals in OPEC, forcing us to drive where we could walk, forcing me to ride my motorcycle where I could ride my bicycle; it is not Ford Motor Company forcing you to take your Expedition where you could take your Focus.

Will there be enough fuel left for the ambulance to haul my exercise-hating butt to the hospital?

Should I drive 40 miles to work out at the Y?

Easy, too, to lay blame for the difficulties on states whose people voted a couple per cent differently than our own; “What could those idiots be thinking?”. They must be fools, right, those people who believe in something other than men, something other than politicians? Why, some of them even suggest that there may be a (G)od. Simply inferior beings, those folks from other-colored states.

Easy to see there are no problems here in our blue-nosed, blue-blooded, blue-stockinged regions – well, none we can’t solve with money.

Sail on, Banker! Steady as she goes! Only the blameless aboard our stout vessel. Let us fly a blue flag from the main topmast, for guiltless are we, we men of the open sea! Look smart there, Sailor! Wipe that oil from your boot!

The lookout tells of dangerous shoals ahead – shall we listen, instead, to that sharply-chiseled face at the prow, the gilded wood we’ve elected?

Buffy Ste. Marie (about 40 years ago) said, “ Blame the Indians/ Blame the Fates/ Blame the Jews or your Sister Kate/ Teach your children who to hate/ and the big wheel goes around, ‘round.”

Sail on, oh Ship of State! We’re just the crew; here to take orders and eat our ration.

No one to blame here. 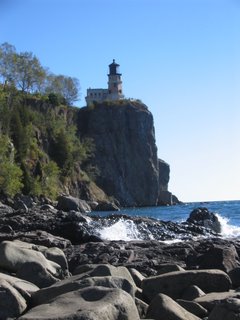 
Topped
with crosses
or crescents
or crows
or crowned
with beacons
that blink
in the night;
they are the same.
We build
towers and totems
to find our way back
to ancestors
and faith
and safe harbor.
Like initials carved
in old beech trees,
they tell
where we’ve been,
who we’ve loved,
and where hearts
have found homes.
We take a walkabout
or a moonwalk;
paddle down streams
and sail across oceans,
testing our symbolism -
the lighthouse shining
after storms at sea,
the good mother welcoming
the child who’s been away,
the sturdy oak
sheltering the weeping willow.
The tower of strength,
never casting the shadow of a doubt.

Yes, I know -- global warming is a VERY BAD THING -- but I will confess to having thoroughly enjoyed a 25-mile motorcycle ride today. In Wisconsin. In January.
Did me more good than a pocketful of anti-depressants.
Posted by Ralph Murre at 10:05 PM No comments:

Email ThisBlogThis!Share to TwitterShare to FacebookShare to Pinterest
Labels: motorcycles

I'm proud to announce that some of my work has found on-line publication at ANGEL HEAD, a recently-begun, but rather classy, poetry ezine. It's editor is the Englishman, Bruce Hodder, formerly of the print journal "Blue Frederick" and capable writer of the blog "Suffolk Punch".
Suffolk Punch, it turns out, is the name of a breed of workhorse; an apt comparison to Hodder. As far as I can tell, he works a full-time job, blogs much of the day and night, writes a bunch of good poetry, and knocks out the odd novel in his spare time.
I know the sun's up about six hours earlier in England, but I still don't see that I should get so little done, by comparison.
Anyway -- go now to visit http://bkerouac.tripod.com/angelheadfebruary2006
and http://bluefredpress.blogspot.com
Posted by Ralph Murre at 9:09 PM 1 comment:

let there be light 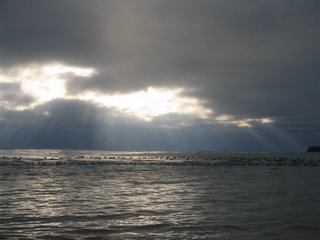 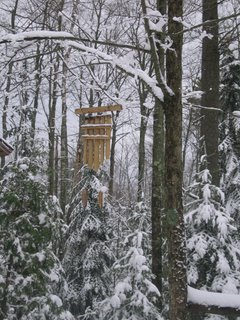 these are the first five
of seventeen syllables
and these are the last
- arem
Posted by Ralph Murre at 4:36 PM 2 comments: 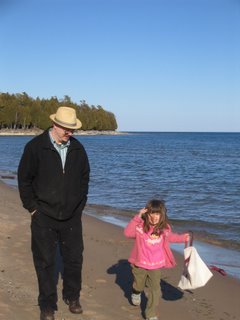 Another wave rolls up the beach
Tumbles stones
Polishes what survives
Shorebirds – hungry – rush
Consume the dazzled on the sands
End the safe, crustacean lives

Another day
Another chance to see the light
To see the clouded, rising sun
Copper flame in pewter bowl
Embrace the certain, coming toll
Or be a running thing, and run