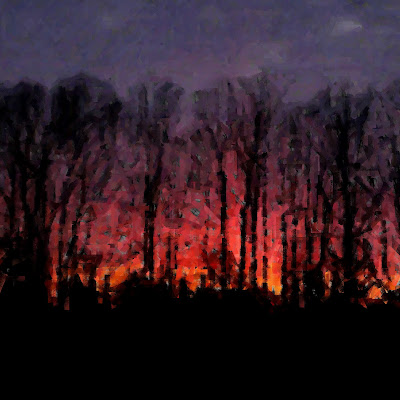 Thanks to The Night

And thanks to all of you for looking in.
Now, I'll be out of Blogland for a couple of weeks.
Later,
~ arem
Posted by Ralph Murre at 8:55 AM No comments: 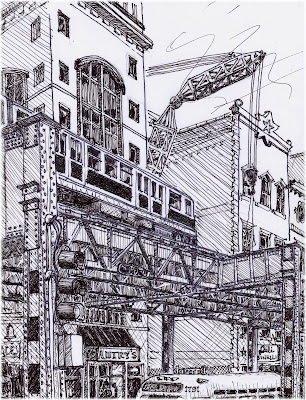 Guess what! More of my work, indeed some of my life, is featured on Poetry Dispatch! Forgive the overt enthusiasm, which is not my usual way, but this is a big deal for me. Please have a look at http://poetrydispatch.wordpress.com/2011/11/13/ralph-murre-crude-red-boat-psalms-the-price-of-gravity/
Posted by Ralph Murre at 10:59 AM 1 comment: 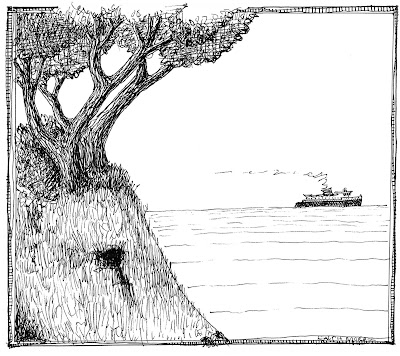 To that ancient white-tail buck we saw Saturday, south of Manitowoc, who is almost surely somewhere else today. You touched us deeply, Old Deer. (He's hiding in plain sight in my drawing, above.)

Great Stag, staggering
beneath weight of your years
told in antlers
weight of injury or infirmity
told in your gait
come down through that grass
this light
this November light

~Ralph Murre
Posted by Ralph Murre at 1:23 PM No comments: 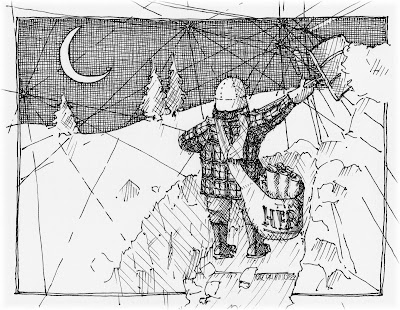 An Open Letter to My Grandchildren

I’m not sure what your parents may have told you about some things, so I am writing to set the record straight. I do not want you to grow up without knowing the whole truth. For instance, why does Grandpa always seem to want a nap? The simple fact is that I am still very tired from the hard work I had to do as a boy. You know we had no PlayStation or GameBoy. We would build stations to play, but then they invented the railroad and they took our stations for that. We would catch wild boys in the forest hoping to play games with them, like maybe checkers, but the checkerboard was still just a distant dream of scientists, so our game boys would grow up and sell insurance or real estate, and we’d have to start over.

Of course, as you know, we had no TV. The letters “T” and “V” had not yet been thought up, which was true of most of the alphabet. We just called them our ABC’s, because that’s all we had. You could call a cab, but that was about it. And cabs were too expensive, so we had to walk everywhere. No, we had no TV, but we did have radios. The trouble with those early radios, though, was that they were steam-powered. If I wanted to listen to hear the weather report, let’s say, to see how many feet of snow I would have to walk through to get to school, I needed to get up at 3:00 AM to gather wood to build a big fire in the boiler of the radio, so there would be enough steam pressure to get a report by five o’clock. At this time, the rest of the family would arise and they’d all sit around the radio to warm up, while I’d make their breakfast.

Then, before school, it was time for my paper route. I would deliver the morning newspapers to all the people of the town, shoveling the sidewalks of the elderly and looking in on the infirm, many of whom I would nurse back to health before seven by butchering a chicken and making a nice kettle of soup with dumplings, which I liked to serve with a little arugula salad on the side. When I had time, I would do a few loads of their laundry and tell entertaining stories while I packed nourishing lunches for their little children. My schoolmates and I would have a few simple chores before classes could begin, but nothing much. Re-shingle the roof if it looked like rain. Install indoor plumbing. Re-decorate the teachers’ lounge. Things like that. We’d study hard for twelve to sixteen hours and head for home, after sweeping up and mopping the floors and getting fuel for the next day’s heating.

Back at home, I’d usually eat a cold supper while doing four or five hours of homework and I’d be ready to crawl into bed right after stitching up a few quilts to keep my brothers warm.

So, now you know the way it was.