Chicken Shack, or The Coop 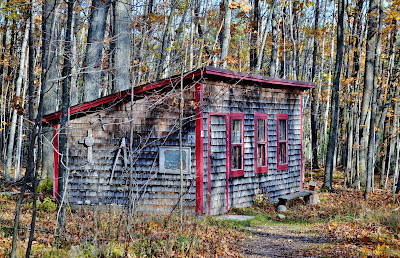 Some of you will remember Norbert Blei.  My friend, my mentor, my publisher.  One of the people most influential in my writing life.  Wrote a bunch of books, published a lot of other people's books, stayed in touch with the wide world of literature and literati,and raised as much hell as he could to save the environment and a disappearing way of life; all from a not-too-reconstructed chicken coop in the Wisconsin woods.
Since Norb's death, his property has been sold, but thanks to his children, The Coop has been donated to Write On! Door County, and relocated to those grounds where it will serve as sanctuary and inspiration to other writers, young and old.
I attended a fine dedication ceremony last Saturday along with about 150 other folks, many of whom paid tribute with their words, their art, their music, and at least one original dance, choreographed just for the day.  Here's the poem I wrote for the occasion:

The Cock o’ the Coop
(On the studio of Norbert Blei)

Beyond , in may-apple May
and blue-sky July gone by,
or in the gray of dim December,
south windows searching for sun,
there would have been Leghorns
I suppose, utilitarian,
clucking and cackling
in this chicken house.
Good layers, Leghorns.
Might have been White Rocks and Barred Rocks,
brooding.  Reds.  Perhaps even
Sunday-dinner , Orpington, or Giant.

one Bantam rooster, crowing
doing his damnedest
to wake the neighbors