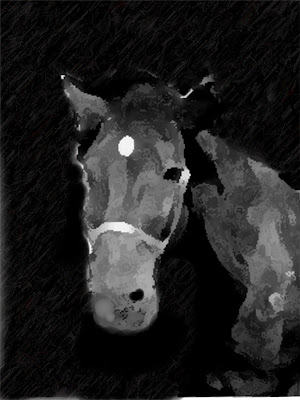 In this one, my father's big, dark workhorse and I are waiting for my father. I hold the bridle and try to keep the restless horse in place to be harnessed to his labors. There is someone else, or some other horse or dog that I do not know and never look at directly, so I don't know if that's important to the dream or not.
.
We are in the house; the horse, the other, and I, looking out the windows with increasing concern for my father, because he's very late now. We're on the second floor, not in one of the bedrooms, but in a big room at the back of the house, which overlooks the whole farm. I apologize for the delay to the horse, who I seem to know very well, but has no name. He whispers something to me in English, the horse does, but I can't make it out at first, because I didn't know he could talk, but then he puts his big nose and mouth right up to my ear, which I find comforting, and the horse says, "He's not coming, Ralph, but it's O.K. It's O.K., Ralph," he says, but I can see he's worried, too. The horse has to go out to pee and can't stand still any longer, so I finally let go of him.
.
It's time for supper already. Someone's getting supper, probably my Aunt Norma. I bring chairs to the table; a normal wooden chair for myself, a large green chair for the other, and a very heavy and very large canvas director's chair, which I cover with a coarse blanket, for the horse.
.
Something is rattling at the side of the house and the other and I see that it is my father, climbing a tall ladder to the window, which I push up, so he can get in. The ladder ends a little below this window, so I reach out to help. I say, "Dad, you're very late, it's time for supper, come in." Now he looks like an actor who looks very much like my father. He's just smiling at me when it hits me: "Oh," I say, "you can't come in, can you?" And my father or the actor says, "No," sees that I'm afraid and says, "Don't worry, it's very beautiful out here. Look." He is wearing no clothes and smiling broadly and the world out the window is, indeed, very beautiful.
.
The actor playing my father slowly backs down the ladder to join an actor playing my Uncle Clarence, though he doesn't look like him. He's also nude, but it all seems normal and good. They stroll off toward the horizon, the naked men, looking this way and that at the trees and those long sunbeams like in children's books, and the flowers. They seem very happy, these actors who are playing my father and uncle, and I don't worry for them.
.
I wonder where has the horse gotten to and who is the other and where is supper? And why didn't they get Bert Lahr to play Uncle Clarence, since they looked alike?
.
~ Ralph Murre
Posted by Ralph Murre at 8:02 AM No comments: 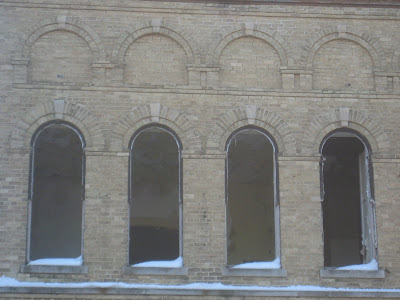 In the language of your country, do you have a word for that moment when you walk off a cliff and stand in mid-air? Is it the same word for that moment after you say, "I do," but you wanted to say, "Wait . . . WHAT was the question?" -- Do you have a word for the color of the fabric of that day someone first says, "don't," or, "you can't," or, "we shouldn't."? What is your term for that season, short or not, between love and hate (if it comes to that); for the season that follows desire? What's your word for the heart that survives? What do you call one that doesn't?

Go now (yes, right now) to Mike Koehler's blog >> http://onehandarmands.blogspot.com/2011/03/ralph-murre-and-me-trading-stanzas.html to see our own little "Braided Creek", with thanks to Harrison and Kooser.

Also Note: Lou Roach, writing for the excellent poetry journal, "Verse Wisconsin", has reviewed my latest book, The Price of Gravity. You can see what she had to say at http://versewisconsin.org/Issue105/reviews105/murre.html 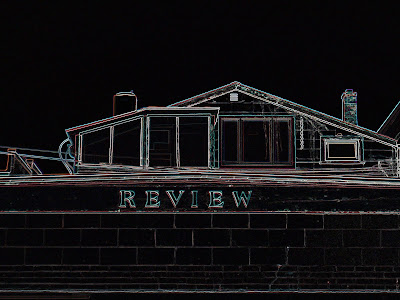 sometimes
look behind you
but
get over it
~arem
Posted by Ralph Murre at 11:55 AM No comments: 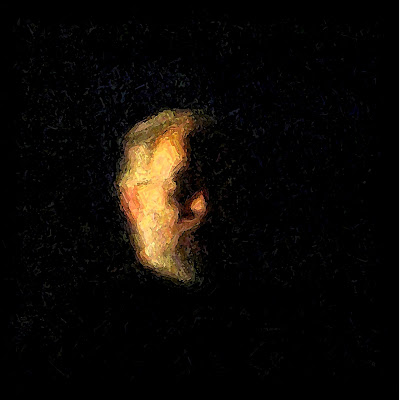 Well, strange as it may seem, and for reasons beyond my grasp, I've been selected poet of the month at the excellent website Your Daily Poem, and I want to offer my sincere thanks to Jayne Jaudon Ferrer who so ably puts things together over there. I hope you'll have a look at http://yourdailypoem.com/ , where you'll have to click on a tab called, obviously, "Poet of the Month", in the upper left-hand corner of the home page. I answer a few questions which have probably been keeping you awake for some time.

My good fortune aside, you'll want to become familiar with the site, anyway. A poem-a-day. All kinds. What could be better?
~ Ralph Murre
Posted by Ralph Murre at 7:42 PM 5 comments: