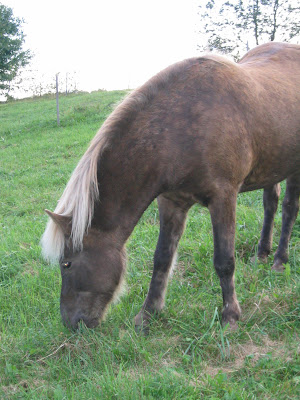 What’s become of them, I wonder;
the soothsayers and blacksmiths,
the coopers and lamplighters,
cart wrights and caulkers.
And what’s become of sidekicks?
Pat Butram -
Andy Devine -
Ed McMahon -
the jesters for justice
and the American way;
where are they now?
Jay Silverheels doesn’t count,
since he was smarter than the boss:
against the silent code of sidekicks,
against the law of buffoonery.
Sidekickin’ didn’t seem like a bad gig,
except for being shot at some
and never getting the girl.
I suppose they were on-call a lot
and did their share of sleeping on the ground,
but they seemed pretty happy.
I believe young people should
look into being sidekicks,
check with tech schools,
learn to ride. 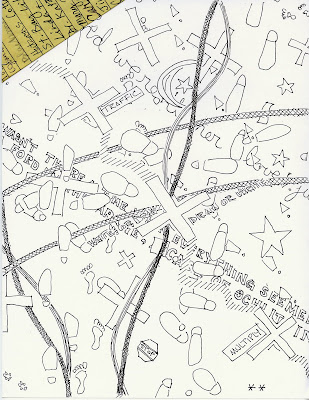 Posted by Ralph Murre at 2:01 PM No comments: 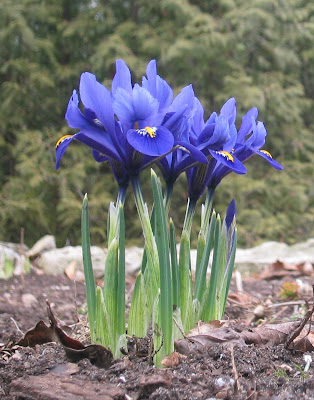 faithful as bulbs
waiting in cold soil
or nuns at their prayers
the calendar pages
of spring
- arem
Posted by Ralph Murre at 3:12 PM No comments:

Justice! they cry
save me from it, sez I
or I and my kind
would swing in the breeze
and a lonely trumpet play
and the thingies would
tug at our flesh
‘til sometime late in the day
if anyone knew
that we weren’t on our knees
begging spirits in the sky
begging please
let us try
one more time
for courage, for courage

Let us try
one more time
for courage

For I and my kind
by choice have gone blind
and our names
are signed to the checks
and our names are in the desert
of oil and blood
and our spirits
are dragged through the mud
as Old Glory waves
and we salute the ones
who send children
salute, and dig graves
for our children
Let us try
one more time
for courage
* * *
- Ralph Murre
Posted by Ralph Murre at 10:24 PM No comments: 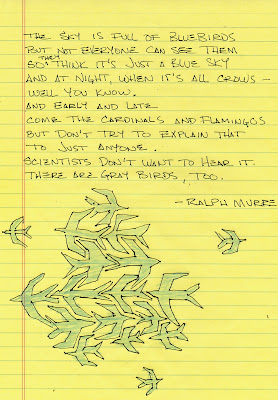 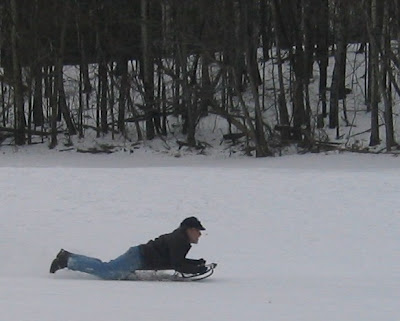 This story is dedicated to all parents in the winters of the 1950's who told their kids to go out and play. And when the reply was, "…but it's too cold." The answer was of course, "Then put on some warm clothes!" And we did. Thanks, Mom and Dad.

A few weeks ago, we celebrated Makena's fourth birthday. It was the first really nice snowy winter day we had all winter. Makena wanted to go sledding. Great choice, the infamous Hill 17 at Peninsula State Park. When we arrived, I was surprised and a little disappointed. Not because the hill wasn't big enough or the conditions weren't perfect, but all the sledders were dragging such poor excuses for sleds. I felt very sorry for all of them. Don't these people know how to go sledding, I thought to myself?! Most of them were carrying inflated pieces of crap, stuffed under an arm, as they trudged up the hill. They call those sleds?! First of all, a real sled has to be heavy enough so when it careens out of control and hits someone, it really hurts. That's part of the deal. Secondly, you pull a sled up a hill for Christ's sake. And you pull it with a rope. And not by another piece of bright yellow plastic, instead of a rope, but a real honest to God piece of hemp. The rope. It has to be worn. The more worn, the cooler it is. And if the rope looks like it just came off someone's horse or John Deere, all the cooler.

As we got out of the car, I proudly reached into the back seat to retrieve my trusty sled. I will show these people, what a sled is. This is not some poor excuse for a sled, nor is it plastic. Nor was this a 'retro sled' manufactured in the 21st century to look like the real thing that we used back in the 1950's. This was the real McCoy from our childhood. THEE FLEXIBLE FLYER from our childhood. (Not to be confused with our beautiful red, dented, metal flying saucer.) But what I reached for was the "nothins' - too - good - for - the - Vaughns" Flexible Flyer from our childhood. I thought it was about time to dust off the sled, which I shamefully admit has been stored in an attic or used for nothing but a Christmas decoration for the past 39 years. It was in the parking lot, at the foot of the hill, when I realized that it was probably a good thing that Makena is still too young to know how to be embarrassed by a grandparent (Ralph and I only have about 1 or 2 more years of that "not-yet-embarrassed of my Grandpa and Nana" window). All heads on the hill turned to see this old-fashioned wooden sled, with real steel blades flash down the hill! I could just imagine the words being exchanged ... "who’s the nut on that thing? Are they trying to kill us with that hunk of wood and steel?! Oh my god, that thing really can go, can't it? It actually steers and everything. " Needless to say we had tons of fun. I was so proud of my Flexible Flyer, that when people who were old enough to know, commented on the Flexi Flyer, I of course told them that it was my actual childhood sled. I was admired by all. I felt like a celebrity.
But, of course Ralph couldn't be outdone.

Ralph reached into the back of the car and pulled out his 'emergency #12 scoop shovel.' The kind you carry in case you get stuck in a blizzard. Unlike Makena, I actually thought about getting embarrassed, but quickly reminded myself that, don't worry Nanc, you knew before you married him, that there would be times like this. People's heads turned, once again, not to gawk at Makena's weird grandpa, or in admiration of the Flexi Flyer, but more of a quizzical look like, "Why is this guy carrying a shovel to the top of the hill?" Without saying a word, Ralph mounted the scoop shovel, gave himself a push and zoomed down the hill with a trail of snow shooting up from behind him, where his heels were digging into the snow from high speed. Yes, Ralph is now known as the guy who rode a shovel down Hill 17. On the 4th ride down, I heard a loud crack from the bottom of the hill and knew I should fear for Ralph. I didn't know if I should be afraid for his ass, his crotch, his legs or his life. But he made it and the shovel was the only one to suffer any damages. The plastic scoop shovel finally cracked down the middle, after it's 5th trip down Hill 17. After all, it's plastic, what can I say?!
- Nancy Vaughn
rushing by the boys
cold steel below the surface
a girl and her sled
- arem
Posted by Ralph Murre at 9:52 PM 1 comment: 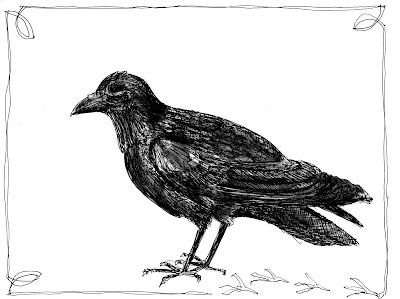 In Black and White

Like keys of ebony above the ivory’s glow
in the bright of a single spot, and
like the raven who scratches morning’s snow,
I play a somber tune.

Like wartime headlines screaming loss
in 48-point bold atop the page, and
like the black-dressed widow darning socks,
her chair and basket the only props;
this white-washed street the stage
where a leading man once stood,
I play a somber tune.

Sunlight and time may bleach the notes
and fade them from the page,
but ‘til there’s light in this dark mood,
I play a somber tune.

Well, I heard it again. Someone on the radio pontificating that we are "a nation of laws" !

I guess that may be the direction they're hoping we'll take, but I don't think it's true now, and I don't know that it ever was. Seems like our sympathy has always been with the outlaw. Screw the crooning dufus in the white hat. Screw the guy behind the tin badge. And if you're not driving at least 5 or 10 miles over the limit, screw you. Who do you know that's completely honest with the tax man? Seems like every really good piece of American writing I can bring to mind has a hero who's doing something vaguely illegal.

I guess a declaration of independence will do that to a people. Kinda goes to their heads. So you get guys like Thoreau who inspire guys like Gandhi who inspire guys like King. Seems like the only hero we could stomach out of English tradition was Robin Hood, tights 'n' all. Sheriff of Nottingham, Sheriff of Dodge, they're all the same. They're all after Robin and Tuck and Huck and Jim to stop 'em before they become Henry and Mohandas and Martin. Then they might have a nation of justice rather than a nation of laws, and that might be scary for the badged and the badgers. (ain't it odd that the non-violent heroes of real life don't seem to live very long?)

Most of us, even the fairly well educated, and especially our lawmakers, have a pretty shaky knowledge of our constitution, but you can walk into any corner bar in the blue-collared U.S. of A. and get a pretty good description of what's in the Bill of Rights, the laws which tell what we CAN do, instead of what we can't. So, I think it may be accurate to call us a nation of rights - try taking one away and see - but a nation of laws? Not yet.
Posted by Ralph Murre at 7:44 PM No comments:

Again, with the moon? 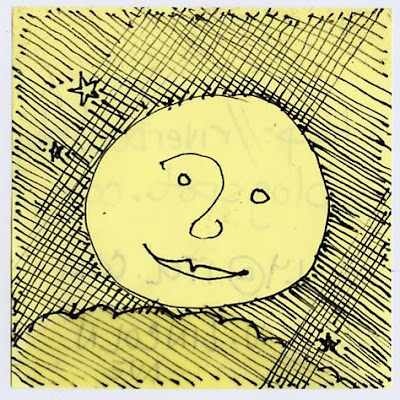