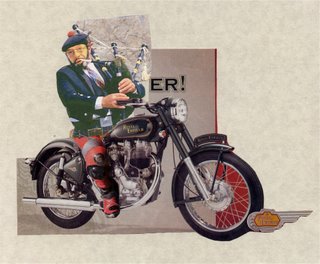 ER!, indeed! There I was, lads, peacefully thumpin' down the high road, and doin' a bit of pipin', all jolly like, don't y' know, when me finger jammed up into the throttle o' me trusty Enfield, and I about to round the bend in the rosy, rosy mornin' out at the Widow MacDowell's. And her, of course, just shifting her little herd to the upper pasture. I'd no choice, lads, but to pipe me mightiest in the hope that the sheep and the comely widow would take warnin', but it was nae to be. Me pipin' and the bleatin' o' the sheep blended in a kind o' rapturous melody tha' would o' melted the heart o' any true Scot, and I's forced to abandon the roadway and rough it through the heather, all the while a-tryin' to slow the merry pace o' me mount, but the Enfield, as though wi' a mind o' her own, reeled onward toward the widow's cottage. Me front tyre lost an argument wi' a wee bit o' a rock, lads, and somersaulted me person ri' through the widow's open shutters and I alit, lads, in her downy bed wi' nary a scratch! Nary a scratch, that is, until the widow comes in, and her a-hungerin', it bein' so long since old Robbie MacDowell past, and I, wi' me kilt all up around me middle and still clutchin' me pipes -- well I tell you true, lads, I did me very best to resist her advances, but in the end, I took pity on the poor lass, and stayed wi' her a fortnight or two, just 'til things had calmed a bit, y'see. I'll no doubt ha' to go ba' and check on her well bein' now, after jus' one more wee taste. Ah, me finger's fine lads, disengaged as I took flight.
- arem arvinson
Posted by Ralph Murre at 4:49 PM