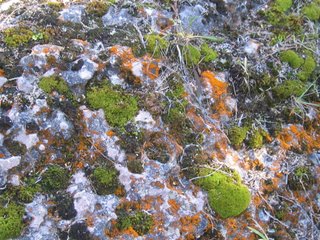 With every day's bad news, it's so easy to feel that the world is going to hell in a handbasket, and maybe it is, but I find some bit of peace by looking closer. Looking beneath the strata populated by humans. I look at the natural world, and I can not find evil. There are, of course, cataclysmic events throughout nature -- earthquakes and tsunamis, droughts and floods and hurricanes and wildfires and all the rest -- but there doesn't seem to be greed, and there is certainly no religion. As humans, some of us take pride in proclaiming that we are a species set apart, above all others. I won't argue with that belief, though I do not share it. It is true that we have powers to create good and bad on a scale that we haven't observed in other species.

But get yourself out of the man-made for just a bit; look at the square meter of earth beneath your feet, and understand that it is older and perhaps wiser, than the human race. Can I assign wisdom to dirt? Knowledge to rocks? Does the bit of dandelion fluff carried on the summer breeze know as much about a satisfying life as I do? Yes, yes.

Look up to the stars and look down to the dirt you sweep from your doorstep and know that they are the same and that you and your human brethren are the same, also. Believe whatever you do about who or what created all this, but don't build churches to convince others of your beliefs. Don't tell others they're wrong. You don't know. And if you don't know, why start a war? If you don't KNOW ( and I suspect that you've never been to heaven or hell ) why enslave yourself to an institution commanded by people who also don't know? Who are committed to destroying races of people who also don't know? I am not a nature writer, but I am an observer of the natural world, and if there is one lesson I've learned from my observations, it is that there is no religion in nature and it is religion that sets humans apart and causes the greatest sufferings. I am becoming a great believer in gods and spirits of all types, but I don't believe that they go to church.

Look to the dirt.

Ralph,
what a true and beautiful piece of writing...and the photo is lovely. I, too, have begun to believe in those gods and spirits who seem more and more accessible to those of us willing to look.
thank you.